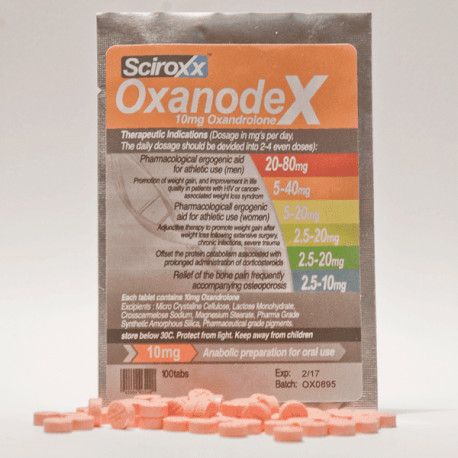 Anavar (oxandrolone) is everyone’s favorite oral cutting anabolic steroid. It produces clean, high quality gains in strength, and a very distinct hardening effect on the physique of the user. Really, I have to say, I love this stuff, although I’ve only used it twice. The only drawback is that it’s a very expensive chemical to produce. It’s also not overly toxic despite being an oral steroid, it doesn’t produce many side effects at all, and is relatively mild on the natural endocrine system (for a steroid, that is). You’re not going to gain much, if any bodyweight from Anavar, but what you do gain will be very nice looking muscle, and little if any weight gain in the way of water.


Unfortunately, it needs to be dosed rather highly if it’s being used alone (which I don’t recommend). Even daily doses of up to 80mgs/day don’t cause many side effects.This makes it very popular, and I suspect we would barely see a cycle without it, if it were less expensive. For precontest bodybuilding preparation and athletes looking to remain in a particular weight class while still moving up in strength, Anavar is typically drug of choice. Despite the need for relatively high doses, it would seem that gains from Anavar hang around for awhile, or at for at least 6 months after you stop taking it.

It’s used clinically for AIDS related wasting and even in recovery routines for burn victims. It’s often the only drug used precontest for female figure and fitness competitors. This is due to the fact that virilization is not much of a concern with it, as it is only very mildly androgenic,and highly anabolic. Men almost never report side effects from it, and in women, the most commonly reported side effect is a temporarily enlarged clitoris

Since it is an orally modified version of Dihydrotestosterone (DHT), it has been modified in such a way to allow it to survive first pass metabolism through the liver. Despite this fact, it is very rare that hepatotoxic (liver toxic) side effects are ever noticed and/or reported. Also, since it is a derivative of DHT, it is structurally incapable of converting to estrogen, so users who may be sensitive to gynocomastia or water retention don’t really have to worry about that problem arising.

With regards to its use in a precontest phase or a cutting cycle, it seems to have profound effects on both abdominal and visceral fat elimination.This certainly makes it very useful for anyone interested in competing in bodybuilding, staying in a weight class, or even just looking good for beach season. It’s certainly got a well deserved reputation for helping people achieve all of those goals.