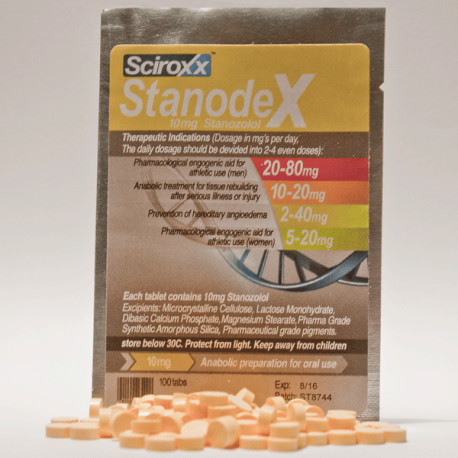 Winstrol (Stanozolol) is a really interesting variant of Dihydrotestosterone. It’s been modified at the A-ring (there’s 4 rings on steroids usually), to make another whole “ring” called a pyrazol group. There’s only one other steroid I’ve ever seen that has a similar modification. Winstrol is a commonly used anabolic steroid for cutting cycles,and certainly it’s been shown clinically to not elicit any really impressive weight gain (if any at all). It’s usually seen as a less expensive alternative to Anavar.And just like Anavar and other DHT derivations, it can not convert to estrogen at any dose,and is not progestenic.

As with Proviron, another DHT derived oral steroid, Winstrol may be useful in any cycle (perhaps even bulking) in order to lower Sex Hormone Binding Globulin.One of the properties of Winstrol is it’s profound ability to lower SHBG  much more than other steroids.This could make more testosterone (or whatever steroids you are using) more likely to remain unbound and therefore active.

A nice quality look can be attained with the use of Winstrol in a decent cutting cycle, but having it in a heavy bulking cycle could end up being problematic, as people often get sore joints from using it for extended periods of time. Stanozolol is an alkylated compound, which means that it’s been specifically altered to endure the first pass through the liver without being destroyed. And since the injectable version is simply a suspended version of the same compound, it’s able to be orally ingested instead of injected. However,since it is alkylated, it is also pretty liver toxic,having one of the worst hepatoxicity (mg for mg) of any steroid.As regards cholesterol,and it’s quite harsh on both LDL and HDL,and cardiac hypertrophy could be a possible concern with Winstrol also. Needless to say, most men don’t use Winstrol for very long in their cycles, and limit it to about 6 weeks or so at 50-100mgs every day (and yes,the same dosing applies for the injectable or the oral). Women typically use 10-25mgs per day, with the high end of that being reserved for competitive bodybuilders and figure competitors.Of course, acne, hairloss and (in women) clitoral hypertrophy are very real concerns.

As it is available in both an oral form as well as an injectable form, and both contain the same compound,you might find this next part odd, but the injectable route actually produces greater nitrogen retention.Another counterintuitive fact about Winstrol is that although the anabolic rating of this product is very high, not too many people report much weight gain off of it. Also, it has a very weak Androgen Receptor binding ability,which is kind of odd for a drug with Winstrol’s effects. unusual for a “cutting” steroid. Protein synthesis is reasonably high with Winstrol,although weight gain is low, paradoxically.