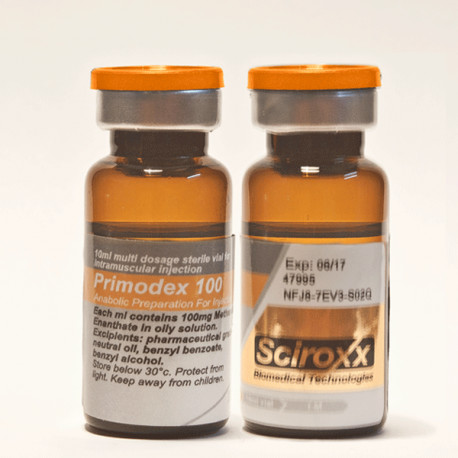 This product is no longer in stock

When we take a critical look at it, in terms of its anabolic and androgenic rating, it appears to be a pretty weak steroid but is rated as stronger than Masteron (Drostanolone)! I’ve used both steroids and can tell you that not too many people would claim that those ratings provide an accurate idea of those two steroids compare to each other. In truth, I used Primobolan at 400mgs/week and wasn’t very impressed with it, and honestly, for the money, that’s really disappointing, since Primobolan is not inexpensive. I also would speculate that the reason many (male) Primobolan users have been less than thrilled with results from it is that they failed to use high enough doses. If I were to use it again (which I won’t), I would probably use 100mgs/ED (Every Day).

Interestingly, Primobolan has a relatively high affinity for binding to the Androgen Receptor, and surprisingly it actually binds with more affinity than testosterone (1). This ability to strongly bind to the AR may be why Primobolan is considered a good fat burner- although most Dihydrotestosterone (DHT) derivations are very potent fat burners (the notable exception being Anadrol).

Primobolan has been used medically to reduce breast tumors, with a success rate of about a third (2), so we can safely assume that no Anti-Estrogen products would be necessary. The use of Finasteride, Dutesteride, or another anti-hair-loss product may be useful, however, as Primobolan has a bad reputation for causing Alopecia.

Primobolan is very useful as both an anabolic as well as anti-catabolic agent, and the probable cause for this property is its ability to aid in nitrogen retention (3), which is a useful trait on both a bulking or cutting cycle…once again, I have to reiterate that the expense of this drug probably makes it a poor choice on a bulking cycle because of the reasonably high doses that it would require.

One of the other very interesting facts about Primobolan is that it’s one of the very few compounds available as both an oral as well as an injectable. Unlike Winstrol and Dianabol (both alkylated and non-estrified steroids) however, which are also available in both forms, Primobolan is available with an Acetate ester for use as an oral, and with an Enanthate ester as an injectable. Unfortunately, in this case, making Primobolan a non-17-alpha-alkylated steroid greatly reduces its potency. However, it must be noted that this alkylation is what makes oral steroids survive their first pass through the liver; it also makes them hepatoxic (liver –toxic). Oral Primobolan doesn’t actually have this drawback, and thus it is very mild on liver function and doesn’t elevate liver enzymes too much. Instead of the more toxic 17a-alkylation, Primobolan (Oral) uses 17 beta estrification and 1 alkylation to make it orally available. For both men as well as women, daily dosing of the oral is necessary, although men would probably want to take 100mgs per day and women would need to take at least 10mgs every day.

Although it is typically considered to be a very mild drug when inhibition of the natural hormonal profile is considered, this isn’t totally true. Men were given a 30-45mg dose of the oral version of Primobolan, experienced between a 15% and 65% decrease in their Gonadatropin levels (4). Since we’re probably looking at double or triple that dose, for men to get any kind of results, it’s also probable that gonadal inhibition will also be increased.