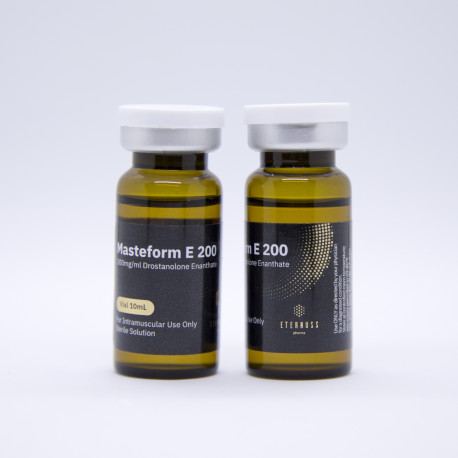 This highly potent formula of the proven long acting version of the popular ananbolic-androgenic product Drostenolone is part of the new line of Eternuss pharmaceuticals.

Drostenolone is a highly versatile Anabolic/androgenic steroid, it's a proven effective additive to any steroid cycle, as the drostenolone interacts avidly with the androgen binding proteins, these proteins which are present in the serum neutralize the steroids in the serum by binding to it thus prevent their binding to the receptors), thus the MasteFrom enables higher free form active concentration of any other anabolic steroid in the serum which automatically potentiate the effet of any other steroid in usage. Drostenolone posses very low toxic profile while has a very favorable effect on stamina, recuperation and nitrogen balance. Other interesting trait of drostenolone is it's anti-estrogenic effect, masteron along with Halotestin the only steroid approved for breast caner treatment, this is a valuable trait especially for athletes on stoerids which are converted to Estrogen such as testosterone and Dball, as the Masteform decrease estrogenic side effects, and lower water retention which manifest itself is better performance to weight ratio as well as most vascular high density muscle appearance.