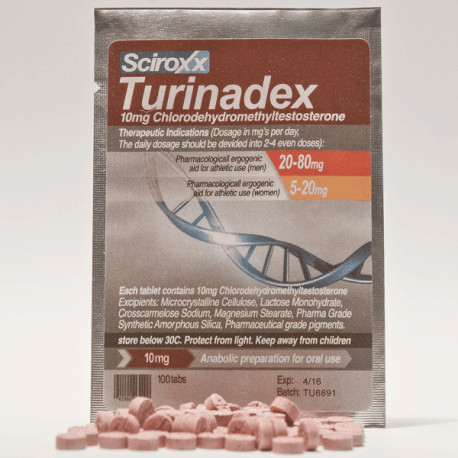 Oral Turinabol (4-chlorodehydromethyltestosterone, commonly called “OT” or “T-bol”) has recently experienced an explosion of popularity due to its recent (re)release by British Dragon, and the subsequent game of follow-the-leader played by most underground labs. It was developed by scientists in East Germany, and is actually Dianabol (a dehydro version of testosterone)  with a 4-chloro modification. The 4-chloro modification is also seen on “Clostebol” although that particular drug lacks the 1-2 double carbon bond that Dianabol and Turinabol both have. The 4-chloro modification actually makes the compound totally resistant to the aromatase enzyme, so users typically equate T-bol to Dianabol, but without the water retention. This is a very good comparison, actually, although it needs to be stated that weight gained with this drug will be significantly less than what is gained with D-bol.

The similarities are actually quite numerous, as they have also both been 17-alpha-alkylated (a carbon atom was added at the 17th position) to survive the first pass through the liver, and therefore be orally active. This, of course elevates liver enzyme activity. If I were to quantify the gains one experiences from this compound, I would say that it’s half way between Anavar and Dianabol, and therefore a perfect addition to either bulking or cutting cycles.