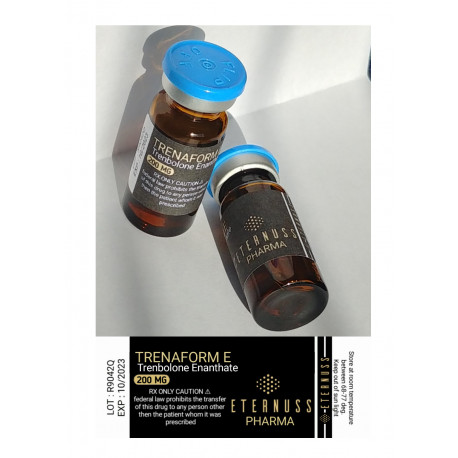 Trenbolone Enanthate is a drug that’s exclusive to the underground market. In other words, you won’t see it with the Organon  or STERIS label on it. It was produced as a cheaper alternative to Parabolan, by a leading underground lab several years ago. When I first got my hands on it, I sent it away to a large lab to have it tested for purity and although they replied that it was probably about 90% pure, they couldn’t be totally sure because they had no test sample to compare it to.

So what’s really interesting here, from a philosophical point of view, is that the underground actually began to produce their own unique products instead of simply producing clones of the steroids already available at the pharmacy. Other than the ester, which only effects the blood plasma levels of a steroid, peak concentration, and active life, this drug is identical to Parabolan and Trenbolone Acetate- differing only in the fact that it is active in the body for a longer time. Therefore, injections with this compound are typically once or twice per week.

Trenbolone is derived from 19-nor Testosterone, but with three additional bonds- making it unable to aromatize (convert) to estrogen, as well as making it not subject to 5a-reduction (conversion to a Dihydro form). Speaking from a structural standpoint, Trenbolone is actually very similar to Deca-Durabolin (Nandrolone Decanoate), except for a c-9 and c-11 double bond. These two double bonds are very important, however, and provide Trenbolone with several important differences. Firstly, the c9 bond serves to prevent aromatization (conversion) to estrogen, while the c11 double bond seems to increase Androgen Receptor binding quite profoundly (although this may also have something to do with the c9 bond as well). Thus, as compared with Deca, Trenbolone’s lack of estrogenic activity and potent ability to bind to the androgen receptor allow it to be a much stronger anabolic/androgenic agent than Deca Durabolin. So what we see in Trenbolone is a drug that’s roughly 4x as anabolic as Deca, and roughly 10x as androgenic (according to the Vida Reference scale). With Trenbolone, the majority of weight gained on this drug is lean and quality muscle.