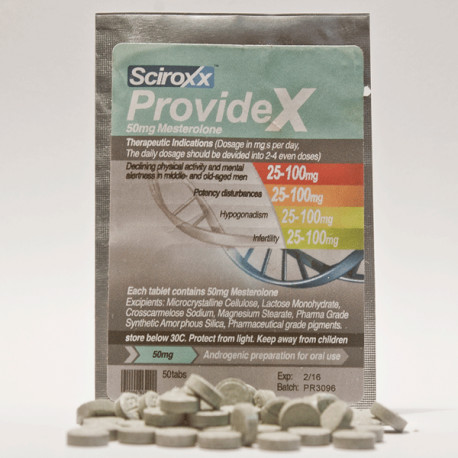 Mesterolone balances a deficiency of androgen formation in different medical conditions of hypogonadism (insufficient Testosterone production in males). This phenomena is common with aging, but appears as well under certain types of endocrine conditions, among them withdrawal of anabolic steroids usage.

By itself Providex has a very weak (if any) anabolic effect (due to the fact that it's simply deactivated in muscle tissue just like dehydrotestosterone by certain enzymes). How ever Providex has a highly potential androgenic impact in target tissues such as the testicles and the brain, and hence have a favorable effect on libido, erectile dysfunction, vitality and spermatogenesis.

More ever Proviron offers unique advantages when combined with other steroids, especially steroids like Testosterone which may be converted to estrogen -

- Mesterolone is an orally active derivative of dehydrotestosterone. It has especially high affinity to binding sites on sex hormone binding globulin (SHBG) and was clinically proved to be about 4.4 more active then dehydrotestosterone in this sense. SHBG is a protein which is present in the circulation and its role is to bind to Testosterone (as well as other steroids) and deactivates them. About 2 % of the steroids which are circulating in the plasma will be found in their free form, while 98% are inactivated by binding to SHBG. The fact that Drostanolone has a higher affinity then other steroids to SHBG means that it'll compete and win the other steroids in the interaction with SHBG, thus higher percentage of the other steroids will be circulating in their free active form in the plasma and consequently have a higher impact on target tissues.

- Testosterone, like other anabolic steroids, is converted to estrogen. Estrogen has some favorable effects with androgens in anabolic terms, how ever estrogen causes multiple unwanted side effects such as reduced libido, fluids retention, gynocomastia (an enlargement or swelling of breast tissue in males), and female pattern fat accumulation. Proviron has been clinically shown (along with Drostenolone) to have a direct anti-estrogen activity, as it manifests itself for instnce in breast cancer treatment (reference - Marinov L., Tsekova V., Koinov K. Drostanolone propionate (masteril) in disseminated breast cancer in women. Immediate results. Khirurgiia (Sofiia) 1987;40:80–86). This direct anti estrogenic activity differs itself from the effect of AIs (aromatase inhibitors) such as Arimidex which prevent the creation of estrogen, or SERM (selective estrogen modulators) such as Nolvadex which occupies estrogen receptor sites. This unique anti estrogenic effect offers two unique advantages -

1. Proviron may be used by itself as a mild anti-estrogen, and by this save the usage and some of the side effects of anti estrogens such as Nolvadex or Arimidex. These anti estrogens may hinder to some degree the muscle building effects effects of anabolic steroids.

2. Proviron may be combined with anti estrogen for more comprehensive and effective over all synergistic anti-estrogen effect. This synergistic effect may of course reduce the required dosage of other anti-estrogen agents which as specified on section 1 have some undesired effects during anabolic steroids applications

Unlike other orally active steroids proviron posses a very low toxicity on the liver, and hence may be used for long periods safely

Typical effective dosage is 25-50mg per day for men. This dosage may go as high as 100mg per day for bodybuilders before competition as its highly androgenic impact have a very appreciative effect on muscle appearance in terms of density and vascularity.

Women should avoid Proviron due to its high androgenic effect, how ever it's not rare that competitive female fitness and bodybuilders are using Proviron as their secret weapon before going on stage to achieve this so sought after ripped and dense muscle looks