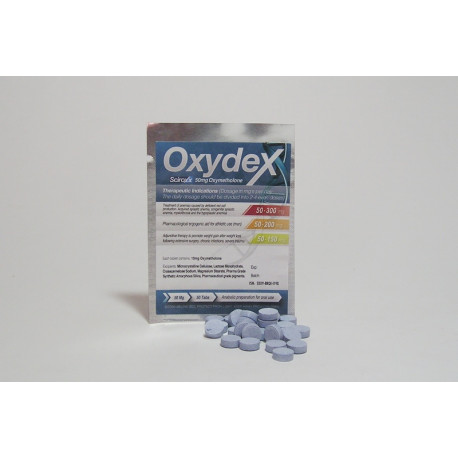 Anabolic steroids promote the growth of skeletal muscle and the development of male sexual characteristics but do also have some other effects.

The active steroid in Oxydex (Anadrol)oxydex is called oxymetholone. It's considered is the strongest Oral steroid and, and the most effective agent for prompy muscle mass and strength gains. Oxydex has an extremely high androgenic effect, which goes hand in hand with an extremely intense anabolic component

The highly androgenic effect of anadrol stimulates the regeneration of the body so that the often feared "over training" is unlikely to occur.

A dosage sufficient for any athlete would be 0.5 - 0.8 mg. per pound of body weight/day. This corresponds to 1-4 tablets; i.e. 50-200 mg/day. Under no circumstances should an athlete take more than four tablets in any given day, preferrably never more than three.

When taking anadrol for the first time the athelete should begin with an intake of only one 50 mg tablet. After one week the daily dosage can be increased to two tablets, one tablet each in the morning and evening, taken with meals.

Higher dosages should not be taken for periods longer than two to three weeks. Any use of anadrol should not exceed six weeks. After discontinuing anadrol, it is important to continue steroid treatment with another compound since, otherwise, a drastic reduction of muscle mass and strength takes place.

oxydex (Anadrol) is the most harmful oral steroid and its intake can cause many considerable side effects. Most users can expect certain pathological changes in their liver values after approximately one week. Those who discontinue the use of oxymetholone will usually show normal values within two months. Oxymetholone is the only anabolic/androgenic steroid, which is linked with liver cancer.