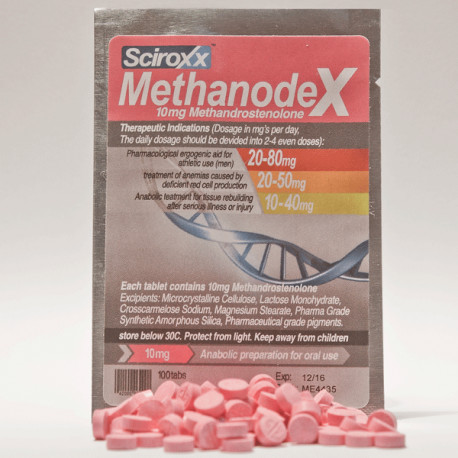 Methanodex is Sciroxx brand name for Dianabol, it contains the active anabolic steroid Methandrosstenolone. After testosterone suspension, and various forms of testosterone, this was second Anabolic Steroid ever produced. It’s simply testosterone with a minor alteration (an added 1-2 double carbon bond), and an added 17a-methyl group. This does two things. The added 17a-methyl group serves to allow it to pass through the liver without being totally destroyed, and the 1-2 double bond slows the rate of conversion to estrogen (aromatization). Although conversion to estrogen is going to be less than with testosterone, it’s actually still going to be enough to cause potential side-effects because it converts to a very potent type of estrogen. Dianabol (often just called Dbol for short) is typically only seen in bulking cycles- and then only for the first 4-6 weeks. Common doses are between 20mgs/day for a beginner and double to triple that for an advanced user.

Although Dbol is usually found in pill form it can also be found as an injectable. As with Winstrol, both versions are exactly the same, just suspended in water or oil versus a pill, capsule or as a paper anabolic. Regardless of the form it takes, it is still a 17aa steroid; which means two things, for our purposes. The first is that it has been altered at the 17th Carbon position, in order to resist being inactivated by your liver, and the second is that as a result, your liver enzymes will be elevated as a result of this resistance to inactivation. This is good because it means that the active chemical will make its way into your blood stream- and it’s bad because these elevated enzymes can stress your liver. In reasonable doses, which I believe to be up to 50mgs/day, the main “side effect” is going to be rapid weight gain. Its watery weight sometimes and not typically considered “clean” gains, but it’s definitely going to make you stronger. I’ve seen studies using some pretty high doses of Dianabol, and the subjects didn’t really suffer any intolerable side effects.

Often, Dbol is compared to Anadrol 50 and in many ways that comparison is apt. Although Anadrol is derived from Dihydrotestosterone and Dianabol is derived from testosterone, they still share a couple of similarities when we take a look at them from an effects & side effects point of view. Both of them cause a rapid buildup of both strength and weight at equal doses, both produce a bit of a bloated look, both are going to stress your liver to an extent as well as raise your blood pressure. Interestingly, both also bind very weakly to the Androgen Receptor, so many of their effects are thought to be non-receptor mediated, and are attributable to other mechanisms. Although Dbol has only modest aromatase activity, I really have to stress that it metabolizes to a very potent estrogen.

The use of Dianabol is currently popular for jumpstarting a bulking cycle, and thus seeing immediate results from the outset of the cycle. For this reason it’s often stacked with longer acting injectables such as Testosterone Cypionate or Enanthate, and Deca-Durabolin. The rationale here with this is that the Dbol will give the user a rapid buildup of weight and strength, and those gains can be compounded when the injectables begin to produce results. This is typically done for the first 2-6 weeks of a cycle, with 4 weeks being the most typical time span.