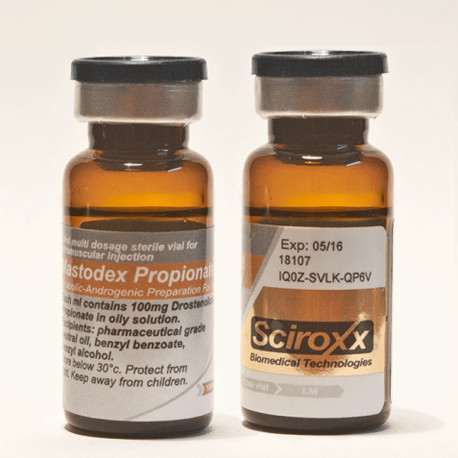 Masteron is an interesting steroid, by itself it has a limited anabolic effect, however its low toxicity coupled by the fact that it actually enhances the effect of any other steroid it combines with as we explain below, makes it a great additive to any cycle.

The active steroid in Masteron is called Drostanolone and it is a derivative of Dihydrotestosterone (DHT) with an added 2a-methyl group. As with any DHT derivative, it is structurally incapable of conversion to estrogen and progesterone.

Drostarnolone like dehydrotestosterone has a high affinity to sex hormone binding globulin (SHBG). SHBG is a protein which is present in the circulation and its role is to bind to Testosterone (as well as other steroids) and deactivates them. About 2 % of the steroids which are circulating in the plasma will be found in their free form, while 98% are inactivated by binding to SHBG. The fact that Drostanolone has a higher affinity then other steroids to SHBG means that it'll compete and win the other steroids in the interaction with SHBG, thus higher percentage of the other steroids will be circulating in their free active form in the plasma and consequently have a higher impact on target tissues.

Masteron is unique as it is one of the rare anabolic steroids that is not clinically used for weight gain. It’s never used for treatment of anemia or wasting diseases like Cancer or AIDS. Masteron is clinically treating certain forms of breast cancer,at which it is reasonably effective. It has, however, been largely replaced by third generation Aromatase Inhibitors such as Arimidex and Aromasin. However, in at least one study, Masteron & Tamoxifen outperformed than Chemotherapy with regards to producing immediate objective responses from patients.It’s actually a weak anti-estrogen, and that’s where a lot of its “hardening” properties probably come from, and why it’s so useful in precontest cycles. If you aren’t using a lot of aromatizable drugs (and are using them in low doses), then Drostanolone may actually be the only anti-estrogen you need.

Drostanolone may also actually interact with the aromatase enzyme to inhibit aromatization (conversion/metabolism) of other steroids into estrogen. Additionally, Masteron seems to be able to interact with estrogen at the receptor site.

Beginners will find the Mastodex an valuable tool when combined with Testosterone at a moderate dosage. The characteristics of the Mastodex which we discussed above will enhance the effect of the Testosterone, lower estrogenic side effects and help to create more muscular appearance, this with barely adding anything to the net side effects .

A typical cycle will be 350-500mg per week  of Testosterone cypionate of enanthate divided into bi weekly injections, with Mastodex at 50mg injected every other day, or at 100mg Twice a week with the Testosterone

Advanced users will appreciate the addition of Mastodex to almost any cycle based on its unique traits, however it really shines on the leaning phase and enhances the desired vascular hardened muscle appearance.  Mastodex has a proven synergistic effect when combined with testosterone and trenbolone. Even advanced users will find a cycle of 10-12 weeks consists of 300-400mg/week of test propionate, combined with 300-400mg/week of trenbolone acetate and 300mg/week of Mastodex as more then enough to achieve a dramatic change in their condition and look. If the diet is kept on point even an advanced user will strip a decent amount of body fat while adding more then few lbs of lean muscle mass to their frame

These are all general examples of course, contact us for the best advice for your individual goals. When you buy with Sciroxx you don't just get real pharmacy quality, but you get out service, knowledge and support, so we're here for you 24/7.