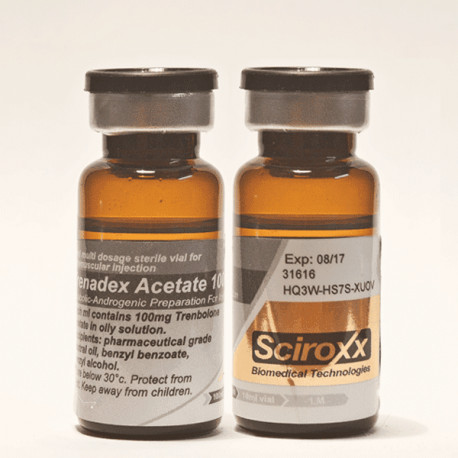 The Trenadex Acetate is Sciroxx's brand name for the potent anabolic steroid Trenbolone acetate. This steroid was marketed for veterinary purposes under the names Finaplix and Finajet. Sciroxx unique version was formulated for the clinical human needs for athletes, and has been proven itself with thousands of competitive athletes since 2006.

Trenbolone is a 19-nor derived steroid, in the 19-nor Testosterone (Nandrolone) family. In fact, Trenbolone is structurally similar to Deca-Durabolin, differing in the fact that it has a c-9 and c-11 double bond. The c9 bond serves to prevent any aromatization (conversion) to estrogen, and thus we see far less water retention with Trenbolone when we compare it to Deca-Durabolin. Unlike nandrolone however The c11 double bond also seems to increase Androgen Receptor binding quite profoundly (this may also have something to do with the c9 bond as well). This lack of estrogenic activity and powerful ability to bind to the androgen receptor combine to make Trenbolone a much more powerful androgen than Deca, however. It also virtually eliminates all water gain and makes the majority of weight gained on this drug (at least in animal studies) virtually all new, quality muscle.This has been anecdotally replicated in human “studies” (read: athletes who use Trenbolone) many times over.

Trenbolone also has the advantage of significantly increasing the level of the extremely anabolic hormone IGF-1 within muscle tissue as well as in the liver.Not only does it increase the levels of IGF-1, by over 200%, it also causes increased sensitivity to this potent growth facto

Trenbolones binding affinity to the androgen receptor (AR) is significantly strongly than testosterone, and this also contributes to anabolism as well as fat loss. Trenbolone currently holds the distinction of being the steroid that binds most tightly to the AR, currently in circulation today.

Trenbolone promotes nitrogen retention in muscles,thus helping to build new tissue, as well as being able to interact with the receptors of the anti-anabolic (muscle growth preventing) glucocorticoid hormones,and thus may also reduce levels of the highly catabolic (muscle destroying) hormone cortisol.In animal studies, it has also been shown to improve feed efficiency and mineral absorption.This serves to make the food you eat more productive in building new muscle tissue, and makes it a very effective agent with regards to nutrient partitioning.Since androgen receptors are found in lipid cells as well as muscle cells ,Trenbolone can act directly on the AR in both of these types of cells to initiate anabolism as well as lipolysis (fat-burning).In addition, Trenbolone significantly promotes red blood cell production and also increases the rate of glycogen replenishment, both of which serve to profoundly improve recovery.